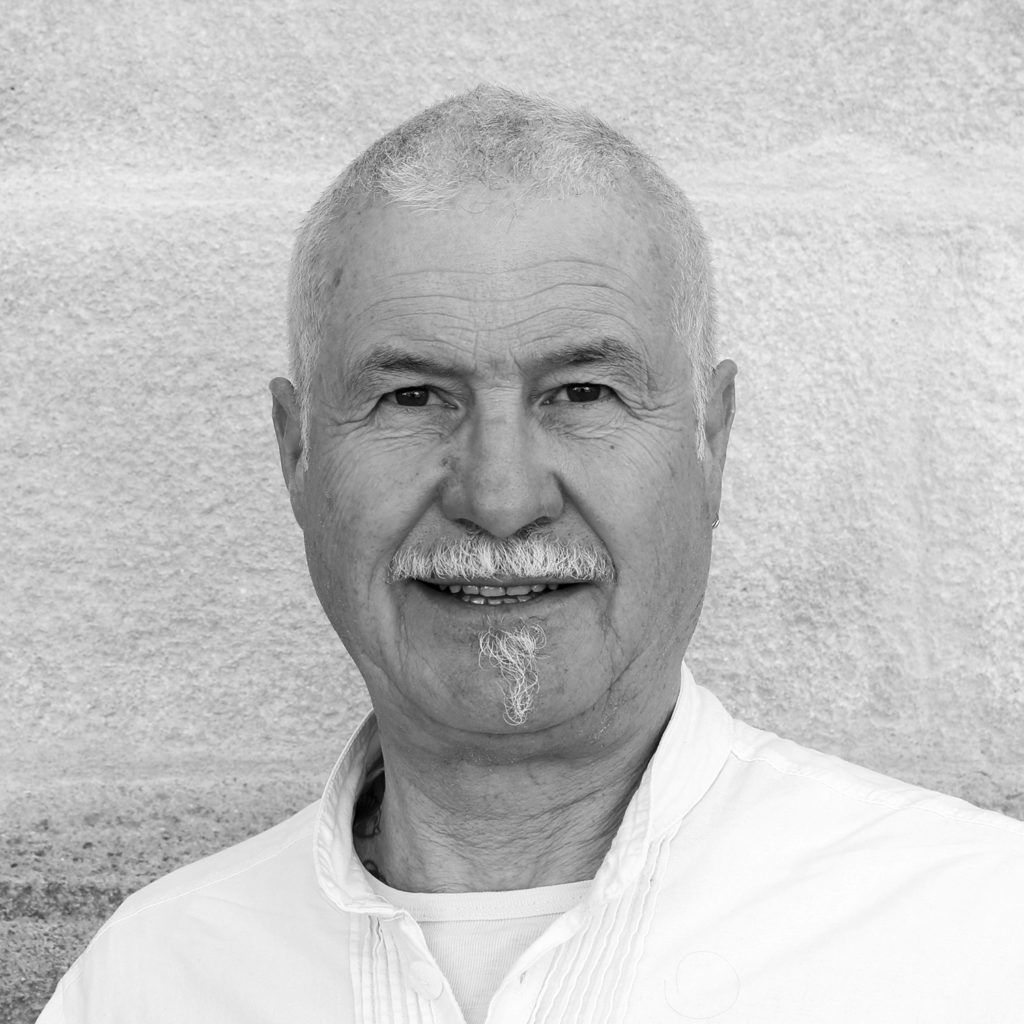 Jean-Claude is the memory of La Rochelle.

A scientific spirit that searches for documentation, studies it, classifies it, draws conclusions from it…

Generous, he shares his knowledge and publishes his studies, gives conferences, guides visits.

The most ambitious architectural project in La Rochelle

The Royal Door is the most ambitious architectural project of the new fortified enclosure of La Rochelle, whose construction was launched in 1689 under the guidance of Vauban. For the "King's Gate" which opens on the way to Paris, you need an entrance worthy of the most powerful monarch of Europe.

In the immediate future, one prefers to invest in purely defensive works before devoting oneself to a monument that must be, of course, an element of defense, but also a symbol of absolute power.

The construction of the other doors was carried great, but without originality. Only the Porte Dauphine, or "porte du Dauphin de France", completed around 1700, presents an architectural effort. The military engineers treated it with care, but we are still in a style inherited from the reign of Louis XIII.

The marriage of brick and stone is still very much in evidence, but is starting to go out of fashion: the neoclassical has already made its appearance in military architecture, especially in the new constructions of the castle of Vincennes. While waiting for the means of edifying the Porte Royale, and since it is necessary to leave the city to join the way of Paris, one is satisfied with a simple bleeding in the rampart.

It is a long open corridor that goes out to the north and naturally takes the name of Porte de Paris. A colonnaded guardhouse is used to house soldiers nearby. In 1915, during the leveling of the ramparts, we find the remains of this door in the extension of the current avenue des Cordeliers.

Then, we call on Pierre Bullet

For the Royal Door, Pierre Bullet, the architect who signed the Porte Saint-Martin in Paris in 1674, is called in. After this monumental achievement, his project is very different.

He launches the outline in 1696 and the fine until 1706. Inspired by the monumental arches of Rome, he is in line with the architects Le Vaux or Mansart.

The budget is not at the rendezvous. The engineers progressively advance: the front door is built in 1706, opening on the half-moon, advanced work protecting the future monumental door.

This front door is still stamped, like the Porte Dauphine, of the royal sun of Louis XIV. As early as 1708, a soldier allowed himself to leave graffiti in his name. 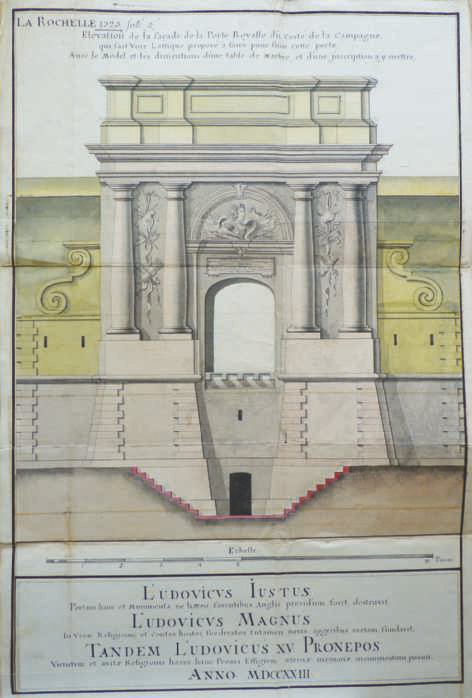 Peace is good for big jobs

Louis XIV disappeared in 1715, France knows a period of peace that leaves more subsidies to devote to military works. The Porte Royale is finally realized from 1716 to 1724 under the direction of the engineer René-Jacob de Tigné.

But the means are counted: only the monumental door is made, with its annexes, guard house, powder keg, prison and latrines.

The building of the governor's house had been mentioned. Modestly, the engineer stopped on an attic facing the facade countryside side, which will not be realized, and had embarked on an ornamental program with the bust of the king, trophies, a pompous inscription on a large plate of marble, presenting "in a few words part of the history of La Rochelle, and what happened most memorable on his occasion under the Reign of three of our Kings".

The whole thing would have reinforced the exceptional character of the door, but would have required more useful means elsewhere.

After commissioning the new Porte, the old Porte de Paris is filled and the curtain wall restored.

Considered completed, the Porte Royale is no longer the object, therefore, that maintenance work. The door is a military defense structure guarded by soldiers.

The graffiti they left everywhere on the walls identify several regiments garrisoned in La Rochelle, such as Royal-Vaisseaux, the Regiment of the Queen, that of Conti or that of Saar, in the eighteenth century, followed by more recent ones until the beginning of the 20th century. 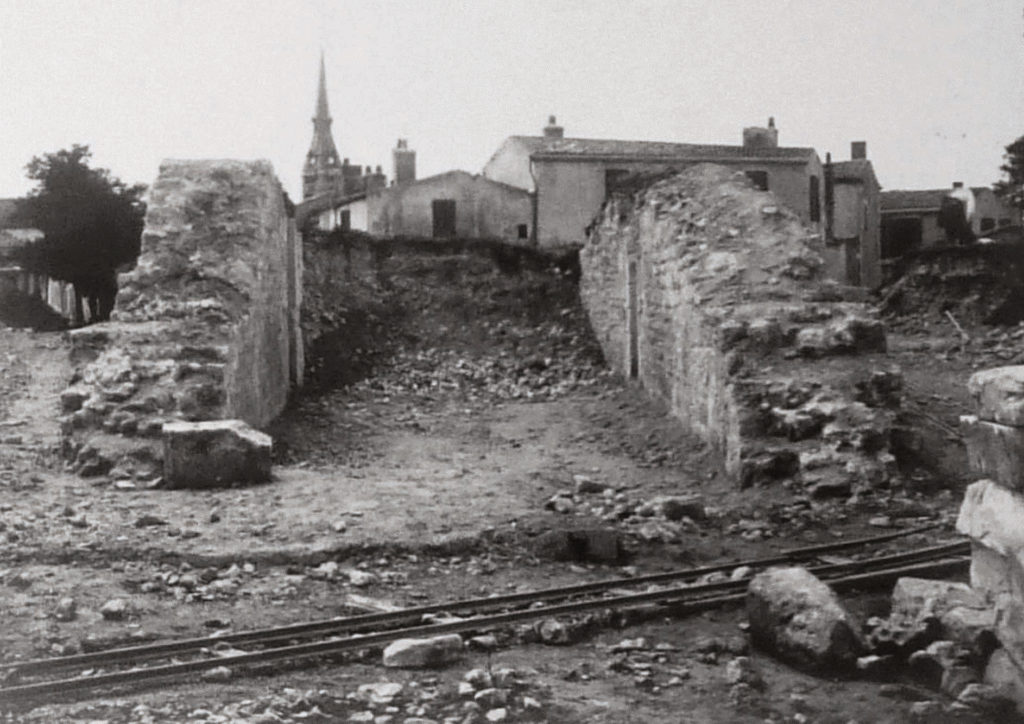 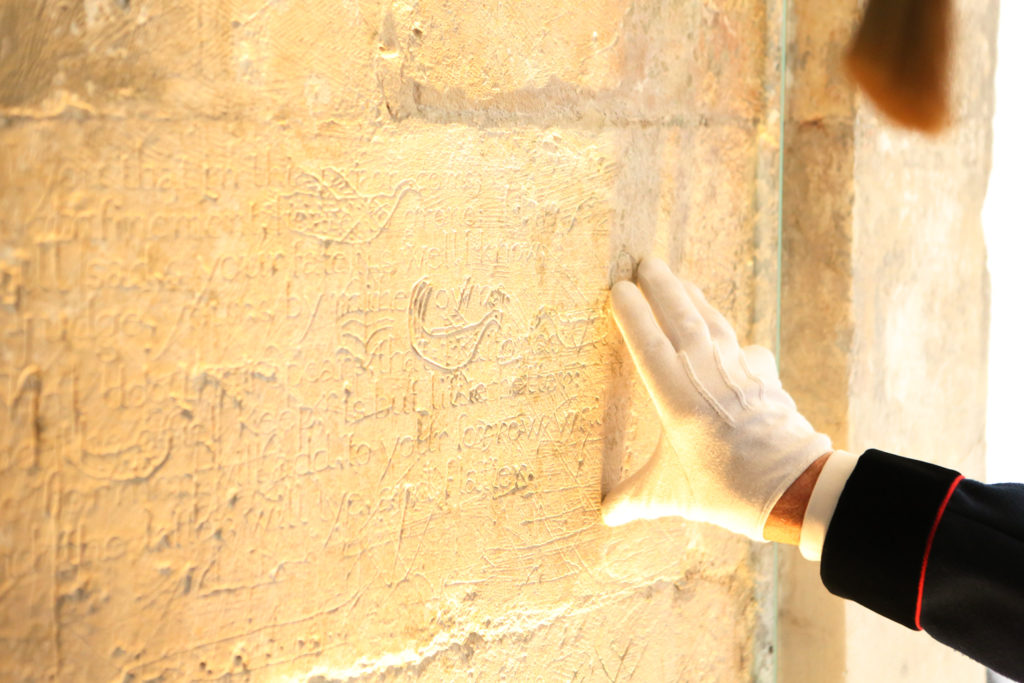 After the wars of Louis XIV, the Regency and the beginning of the reign of Louis XV are a period of peace.

New sounds of weapons are not long in being heard. In 1740, the king embarked on the war of succession of Austria.

English and Dutch having allied with Austria, the conflict also becomes maritime. The frigates of the Royal Navy of the port of Rochefort launch in defense of the coasts and make many catch among the English ships.

We pile up the captured crews in the Lantern tower. As space becomes insufficient, prisoners are imprisoned in the prison of the Porte Royale, then the room of the guard officer is also requisitioned.

The graffiti left by the English sailors cover the walls of their places of detention. Subsequently, they are exchanged for French seamen detained in England.

Some English sailors, sick or wounded, die at the Porte Royale and, as they are Protestants, the religious of Charity bury them in their garden. After the Austrian War of Succession, there are no longer foreign prisoners imprisoned at the Porte Royale. 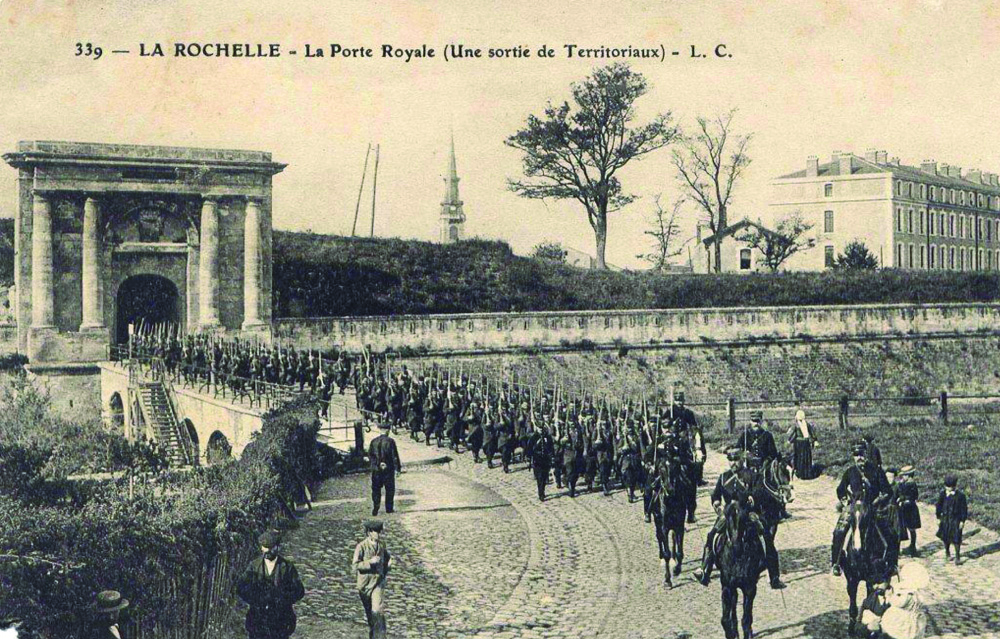 The fortifications of the city having been decommissioned by the Ministry of War, around 1900, the Royal Gate is handed over by the Military Engineering to the Service des Domaines in 1912, then to the administration of the Beaux-Arts.

At the beginning of the 20th century, and especially after the First World War, horse-drawn traction gave way to motor vehicles, which were becoming more and more numerous and more powerful.

The wooden drawbridge and the width of the door are constraints.

In 1920, a bypass is made by two breakthroughs in the curtain walls, on each side of the door.

The monument is then used for various purposes. During the occupation, the German army set up a telephone exchange.

In 1953, the city of La Rochelle bought the door to the State. Already classified a historic monument in 1909, this quality is extended in 1974 to its front door and the surrounding walls.

The street around the door to the north is then removed, allowing the recovery of the deep moat and clear the bases of the door.

At the end of the 20th century, considered obsolete, the door is decommissioned, squatted and degraded. 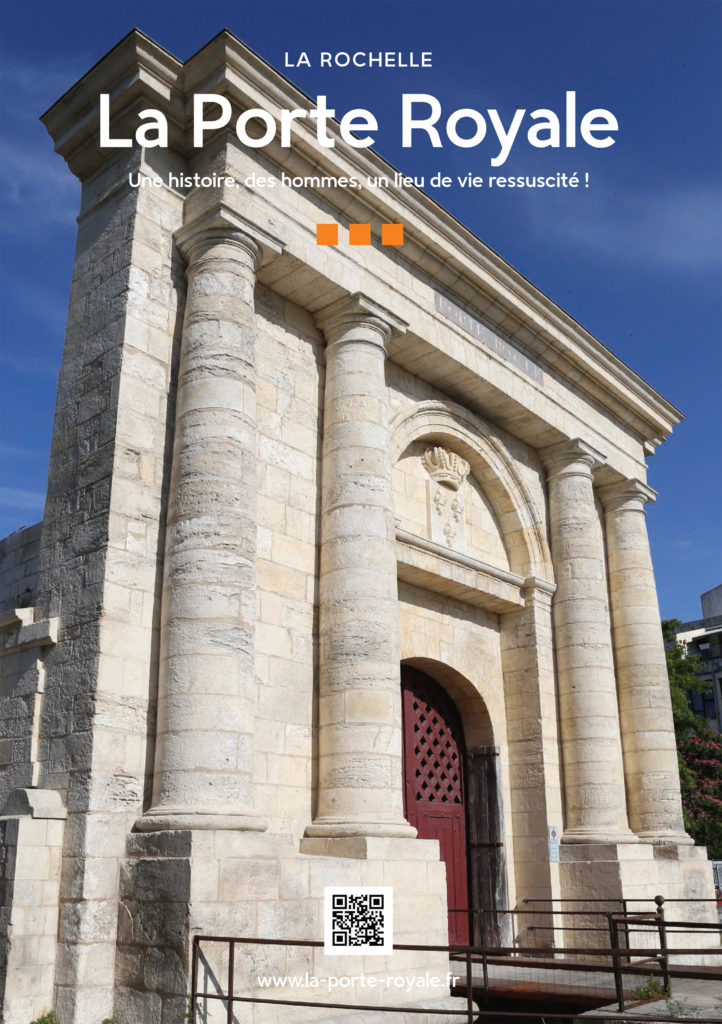 All the friends and actors of this beautiful project have mobilized to write and provide images and archives elements to make this beautiful brochure that allows to place the Royal Door in its past and current history.

A beautiful magazine to discover and browse with pleasure.